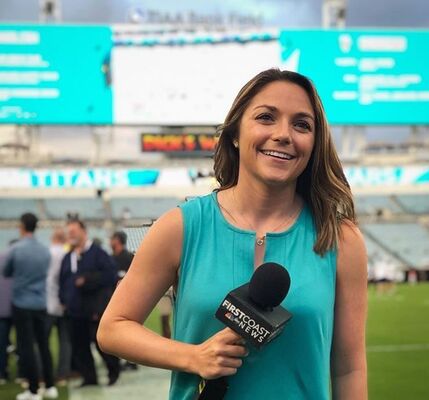 Post-game coverage following Duke's buzzer beater win over Florida State (January 12, 2019)
Born and raised in Freehold, New Jersey (can you name the other most famous native?), I have been a Sports Anchor/MMJ at First Coast News in Jacksonville, Florida, since September 2018. Previously, I served as a Sports Anchor/MMJ in Cedar Rapids, Iowa.

Although the Jaguars weren't quite as successful as the Hawkeyes in my first season on-the-beat (it's pretty hard to top a 12-0, Rose Bowl season, right?), I've been blessed with many incredible opportunities in my short time in the Sunshine State. I've expanded my repertoire through extensive Daytona 500 and PGA Tour & Players Championship coverage. I take pride in the creative storytelling my team and I have been able to bring to the First Coast -- a unique brand in a competitive market.

My passion for local sports infamously began at the "Bruce Beck and Ian Eagle Sports Broadcasting Camp" while I was in high school and eventually led me to Ithaca College.

I've had the opportunity to report and write here in the United States as well as internationally through my work at ESPN America in London. All the while, I have continued to learn, serve my community, and strive to do better than the previous day. Not too shabby for a kid from "The Jersey Shore."

​Thanks for visiting my site and I hope you enjoy!